Welcome to the 4.5 Portal Quest update! This update features our community named Hero, new Rarity, and some awesome bug fixes/improvements! As Our Heroes make their way back through Calamity Cay, Gate Keeper warns them that the corrupt portals could be linked to the creation of the Hollows. They now must seek out the all-knowing Sage of Wisdom if they hope to save Ember. Will they survive? Eh, it’s about a 70% chance. Automa-Tom loves visiting new planets and searching for intelligent life forms. But since arriving on Ember, it thinks its life scanner must be malfunctioning. It hasn’t found a single intelligent species so far.

Defense Matrix
Automa-Tom shields itself for a percent of its Missing Health for a duration. Any shield left over when its duration expires is converted into Health.

Lifeform Analysis
Automa-Tom studies the two closest enemies for vulnerabilities, dealing damage to them. Once studied Automa-Tom reveals enemy weaknesses to its team for a time: 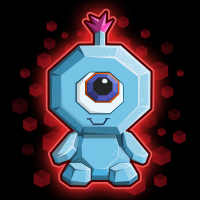 Interplanetary Plush
No matter which planet Automa-Tom goes to, it always carries this stuffed alien to remind it of its home, Bluper.

When Automa-Tom dies it explodes in a blaze of glory, dealing damage to all enemies and Silencing them for a time. The explosion also breaks enemy shields on impact.

This update is currently scheduled for Thursday, July 2.

I know this will fall on deaf ears, but s10 was JUST given Red+14, during the merge today, and now we have to go to Gold+0 on Thursday? For real?

But should we expect anything less?

Honestly?
I expected S1 this week, but S8 next week.

Least I’ll only have 1 S8 account to cap.
If Samm ever gets the accounts merged, right @Thanatos_II ?

Yes 1 week would have been decent. It was enough to drag people through 50 levels, and have them ready for the next one today, but another Thursday, it’s like blood letting

If 50 levels was kicking and screaming, and today’s was groans and complaints, all that’s left is to lay down and die a slow death.

S11 has cap raise every 3 week now for 8 months and missing at least 6 heroes for level they are.

Daisy Jones is (temporarily I’m sure) lost a sea

and won’t be able to appear on Server 1 with this update. She’s been replaced by Automa-Tom - you can check out it’s stats above.

I hope she either took the S8 cap raise with her or left some booty for the s10 folks to weather a second cap raise in 4 days.

This post was flagged by the community and is temporarily hidden.

This post was flagged by the community and is temporarily hidden.

I’m really trying not to lose it… i think it’s now an office joke to see how many people yell and scream.

Having been through seven of these merges already…

No, this is about right.
The issue is that S10 had the biggest jump, and the longest freeze, so people are already up a height.

And the soonest cap raise after the merge too.

Per blue are quite rightly in “least said, soonest mended” mode.

Up to you.
Thanks for playing!

What time is this taking place today please?