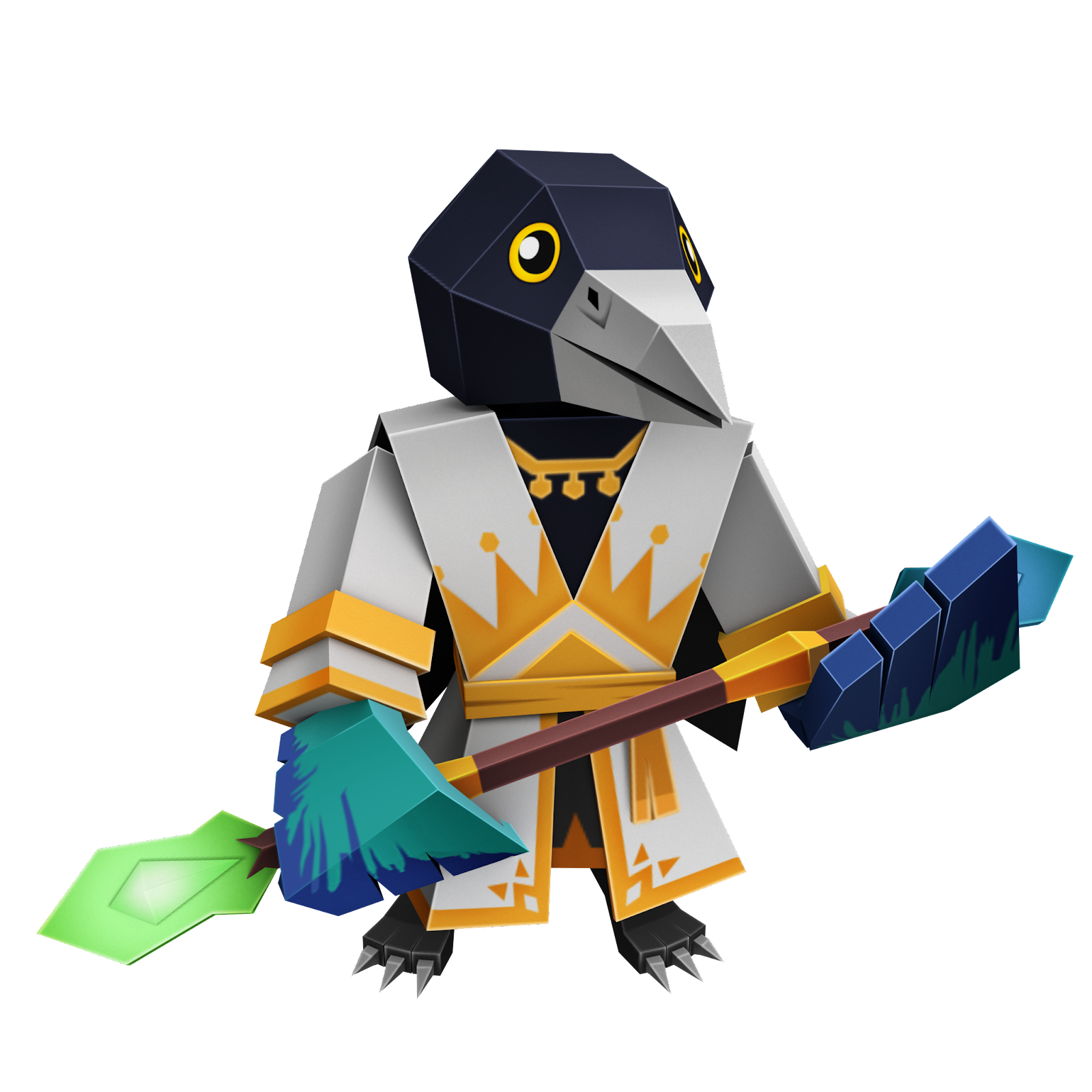 Magpie Mage mostly learned all of his magical abilities himself. I mean, he did have to learn how to use the powers once he stole them from others. It’s not his fault that he’s really persuasive…and has a thieving tendency.

Active: Magpie Mage deals damage to all enemies and applies each mirrored debuff for X seconds.

Note: Generic debuffs that CAN’T be mirrored include Possession, Bleed, and Execute.

Just Winging It
Magpie Mage deals damage to the enemy with the most energy. This enemy has all of their energy removed and is Fatigued for X seconds.

1500×1500
Payout
This Hero gains energy and health whenever the enemy with the most threat dies.

Avis Amethyst
Magpie Mage won this necklace in a Avian Mages Duel. He hangs it above his nest so that birds passing by will know how super awesome he is.

Mirrored Magic deals bonus damage. Enemies can no longer be Blessed while affected by any of the collected debuffs. 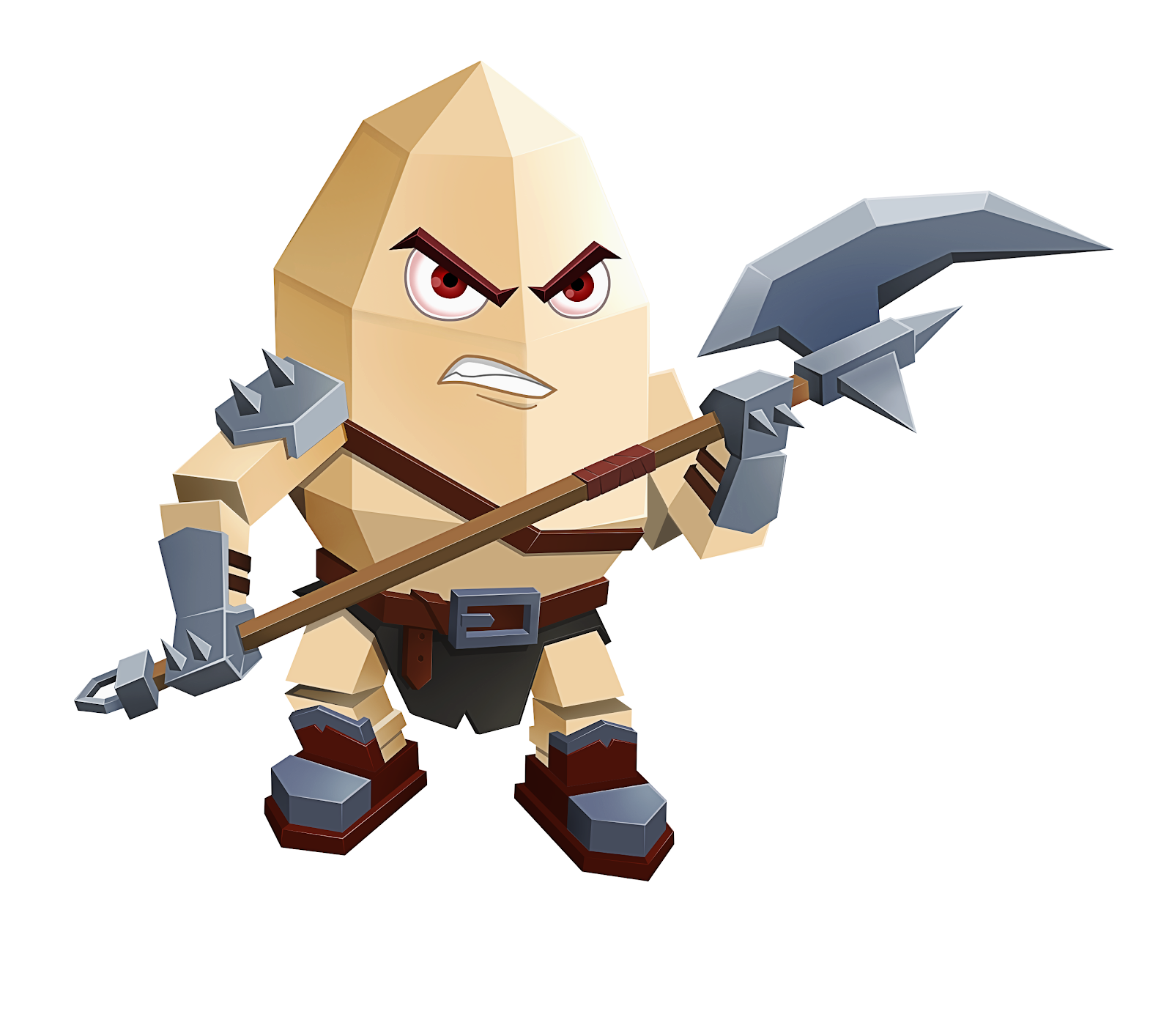 1600×1414
Rotten from his shell to his yolk, Eggsecutioner is a hard-boiled warrior who’s always ready to take a crack at violence. Egged on to his carry-out mission of eggstrajudicial justice, Eggsecutioner is a free-range killer who’s always scrambling from battle to battle. Perhaps one day he will slip that heavy yolk from around his neck, but for now, he’ll fight any albu-men that come his way, waiting until he sees the whites of their eyes, and making sure they never see the sunny-side again.

Egg Drop Souplex
Eggsecutioner slams the ground and deals damage to all nearby enemies. Enemies damaged are also Slowed and have their Attack reduced for X seconds.

Thick Skull
Can’t take more than a percent of Max Health in damage from a single attack.

The Eggemplary Chalice
Only an egg of pure and utter perfection may rest upon this chalice. Luckily, Ember has an abundance of perfect eggs! No one wants a repeat of the famous rotten egg scandal.

Egg Drop Souplex deals bonus damage. Additionally, when Eggsecutioner’s shell cracks he heals himself for a percent of his Max Health and gains a percent of increased Energy Generation for the rest of the wave.

Passive: Eggsecutioner and his allies cannot be Knocked Back.

This is a full app and server update that is currently planned for Wednesday, April 13th.

Mayyyyyybe I should have waited a day.
This was already 1Gb of additional files, and that’s before the changes in this next patch.

Also…
You didn’t mention the egg?
I was promised an egg!

You still get your egg

In 20 days, it’ll be my anniversary of playing this game…

Do people get a bonus when they reach 1825 days? @Loutre @Samm

Was gonna say the same thing.

So apparently still no way to use the thousands of essences building up in my inventory.

Just wondering if Egg is a nod toward a player no longer on game. Magpie could be too, but that would have less to do with name than his Description and Skills being related to a certain players character traits

@Loutre or @Samm is the hour in which it will occur today known yet ? Or did I just not read Announcement right and missed it ? Will peruse a second time to make certain. Thanks

Is it 5am or 6am for them right about now?

I usually tag @sticker_jenni for this

They are CT - so 9am CT is one hour before queue

Plus they have goat yoga and stand up, sit down, put your left leg in, turn around and do the hokey pokey on your hot desk meetings to do, before they can start the process…

What happened to Bob to make you switch

Bob didn’t make me want to come back
Anniversary stuff (e.g. egg) did.

Plot twist: Bob asked for the egg to be released?

She found the game more eggciting this week.

How long is this update?